I’m overdue for an “autism diaries” update–as a few recent developments with J have reminded me. At a time when the world as a whole seems so profoundly screwed up, it’s nice to reflect on how far this one little guy (now 6 foot 5) has come.

J was born profoundly deaf–so deaf that a brainstem test revealed no auditory awareness whatsoever. As this news took shape (literally, in the flattening lines of an EEG screen), we had no idea about cochlear implants. As far as we knew, J faced a future of profound silence.

That vision was soon moderated by cochlear implant pamphlets and phone calls to the parents of implanted toddlers. But just how well an implant would work for J in particular remained disconcertingly uncertain. There was, in the late 1990s, simply not enough data for firm predictions.

Some three months after J was implanted, I played a chord on the piano while he was facing away from me, standing on a chair, engaged in what we thought was a passing hobby: turning on and off a ceiling fan. I played the chord and he promptly turned around and looked right at me.

But why, the speech therapist wondered a few months later, did he remain so oblivious to speech? Enter diagnosis #2.

J as it turned out, was not just “profoundly” deaf, but “moderately” autistic. Not only that, but “moderate,” in the context of autism, was pretty bad.  Unlike the “moderate” hearing loss we’d initially hoped for way back when, “moderate” autism (or so we were told) meant something much more debilitating: some language, minimal “splinter” skills, a lifetime of dependence.

Fast forward 19 years and, after several years of GrammarTrainer, an intense regimen of schooling (mostly in regular classes) and one-on-one tutoring by a variety of creative and talented lay people (and his parents), together with multiple-times-per-week outings all over the city and state, J is, according to two recent and thorough psychological exams, ….still moderately autistic.

But he’s also slowly making his way through college, majoring in computer science (and/or math). Though he lives at home, he independently gets himself to class every day, keeps track of assignments, exams, and schedule changes, meets with professors or TAs as needed, turns in his work, and participates in class and extra-curricular activities.

He’s even done some in-class presentations–and done OK on them. His grades aren’t perfect, and there’s nearly always a class or two that doesn’t work out the first time around and must be dropped at the last minute. But he’s managed to complete the English and Communications requirements, and has done well in two other courses you’d think would be huge struggles.

The first was linguistics. Assignments for this class included phonetic transcriptions of spoken English, and I doubted whether our profoundly deaf child could handle all the acoustic details. Would he hear the subtle air puff that accompanies the “p”-sound, but only when it occurs at the beginning of the word? Would he hear the difference between the “p” in “pat” vs. “spat”? I watched with amazement as J effortlessly completed these transcriptions, only then realizing how much of a miracle the cochlear implant really is:

The second course (still in progress) is psychology. You’d think a subject like this–with so much of its focus on emotions and social dynamics–would be particularly out of reach for a student with moderate autism. How accessible could concepts like oral fixation, or super-ego, or collective unconscious, or peer pressure, or social anxiety disorder, possible be?

As it turns out, there are two moderating factors. First, to the extent that psychology analyzes concepts that most of us have some intuitive understanding of, it makes those concepts more accessible to those who don’t. Second, a lot of psychology involves more accessible topics like neurology, cognition, and learning–some of which really resonate with J. Not surprisingly, he particularly enjoyed the chapter on cognitive illusions.

Still, it’s amazing to me to see (once I’ve laboriously worked through the textbook’s explanations with him) how quickly J grasps and generalizes concepts like operant and classical conditioning.

Just for the heck of it, I brought up this last topic in a recent exchange of text messages. I had headed out for the evening, having told J (when asked) that there would be no ceiling fans where I was going. A few hours later, he texted:

I sent him this picture of the ceiling of my current location: 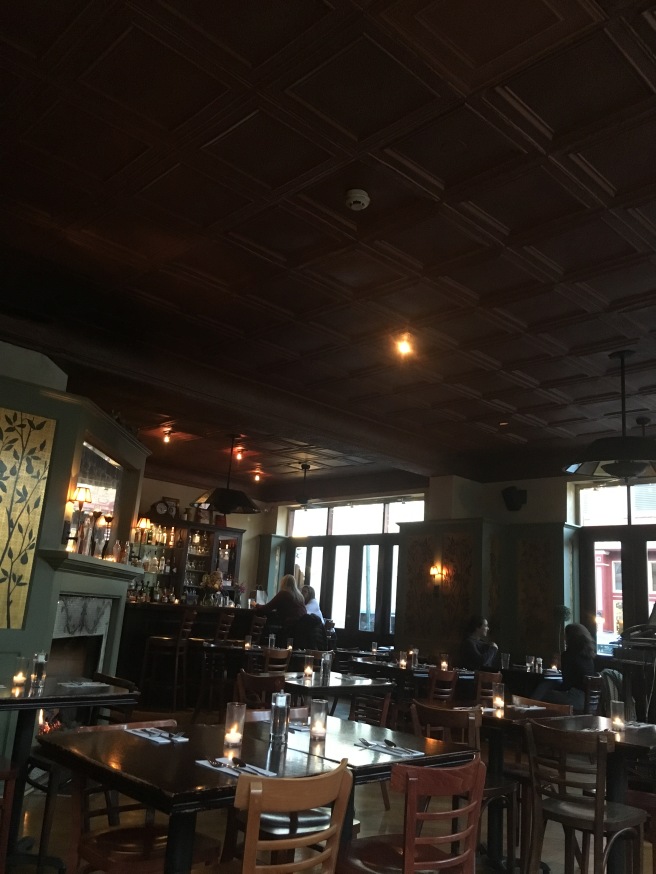 Me, a bit confused:

I thought you said no fans

Me (a bit sheepishly):

And they’re not going to move.

Ok but how many fans does the restaurant have?

And they will stay off.

I then decided it was my turn:

It was years ago

As promised, below is a slightly edited Goodreads review I wrote of The H Factor of Personality: Why Some People Are Manipulative, Self-Entitled, Materialistic, and Exploitive–And Why It Matters for Everyone by Kibeom Lee and Michael C. Ashton.

The book was especially meaningful to me because prior to reading it I had spent 10 years wrangling with my school district–wrangling as a parent and, as a resident, engaging in political efforts to improve it. The review’s references to hiring decisions all have to do with district hiring.

Reading The H Factor, I realized that a core belief I held about human nature was completely wrong.

The H Factor adds a 6th personality dimension, “Honesty and humility,” to the traditional  “Big 5“:

The first 6 chapters of The H Factor are a revelation. Fantastically helpful.

The most useful points for me:

– Honesty and humility (the “H” factor) track together in numerous languages and cultures: the figure of “Honest Abe“ is a reality everywhere. By the same token, dishonesty and arrogance also track together, which means that when you’re dealing with arrogant people you’re on reasonably safe ground assuming they are dishonest as well. I didn’t know that.

– It’s quite difficult to gauge another person’s level of honesty and humility, even after you’ve known him or her for some time, and this is especially true in the work place. This finding, in particular, explains some of the hiring fiascos I’ve witnessed over the past several years.

– People high (or low) in “Openness to Experience” prefer each other’s company.

– The other 4 personality factors seem to mix together randomly and happily, as do the high’s and low’s of each dimension taken individually. E.g.: high-Emotionality can marry low-Emotionality, and high-Agreeable can marry low-Agreeable, but High-H can’t marry Low-H, nor is High-O happy with Low-O.

The chapter that explains what ‘low-H‘ looks like in combination with the other five personality factors is especially illuminating. As it turns out, a person can be dishonest, arrogant, and agreeable. A warm personality and warm words do not imply honesty and modesty.

That’s one mistake I won’t be making again.

If you spend much time dealing with people beyond your family and friends, Chapter 4 alone is worth the price of the book.

One caveat, and the reason for 4 stars instead of 5: the two chapters on politics and religion are weak, and conservatives in particular should steer clear of the former. Everyone else should, too.

The authors report that, in the U.S., liberals and conservatives have the same level of honesty and humility, but then devote many pages to “Right Wing Authoritarianism” and “Social Dominance Orientation,” neither of which is compatible with honesty and humility. Nor, to my knowledge, has either construct been validated by factor analysis of the everyday language people use to describe personality.

Meanwhile, the main factoid Ashton and Lee offer re: religion is that religious people are slightly higher in Agreeableness and Honesty/humility than everyone else, a difference they suggest can be chalked up to “softhearted” people hoping everyone gets to see each other again in heaven. Yes, that would certainly account for millennia of religious belief. (And what about Buddhists?)

The problem is that Lee and Ashton are experts in personality, with little exposure to political philosophy, theology, history, or even social psychology (so it appears). Their musings on politics and religion read like filler.

And see:
Broward County and the H factor

Broward County has been on my mind.

It’s been on my mind for the same reasons it’s been on everyone else’s mind, but it’s also taken me back to a book I read a few years ago, which believe it or not is at least tangentially related to the subject of this blog:

The H Factor of Personality: Why Some People Are Manipulative, Self-Entitled, Materialistic, and Exploitive–And Why It Matters for Everyone by Kibeom Lee and Michael C. Ashton

The “H factor”–“H” stands for honesty and humility–is a core personality dimension uncovered by a form of corpus linguistics:

Trait theory takes a lexical approach to personality, which assumes that traits can be described using single adjectives or descriptive phrases. If enough people regularly exhibit a form of behavior and no term exists in a given language to describe it, then according to the lexical hypothesis, a term will be created so that the trait may be considered and discussed with others.

Until the late 1990s, when Lee and Ashton plucked the H factor from the Korean language, lexical research had uncovered just five such dimensions. They argue that “H” should take its place alongside the Big Five:

Fun side note: Lee and Ashton weren’t actually looking for a 6th personality factor when they found it. They were looking to see whether Korean personality adjectives sorted into the same five categories Western adjectives do.

The answer was yes: Koreans describe personality the same way we do.

Having established the apparent universality of the Big 5, they decided to see what happened when they sorted the list into 6, 7, and 8 factors:

[N]ow we wondered how the Korean adjectives would sort themselves out if we asked the computer to sort them into more than five groups. So we checked out the results for six and seven and eight factors. . . . To some extent we were just procrastinating, taking a break from the chore of writing the manuscript. But we were curious to see what would happen.

(Now there is one fruitful bout of procrastination.)

The rest is history:

When we looked at the results for eight factors or seven factors, some of the categories were very small, consisting of only a few adjectives. But the results for six factors were much more interesting. . . . . [T]here was a sixth factor that was fairly large and easy to interpret: on one side, it had adjectives (translated from Korean) such as truthful, frank, honest, unassuming, and sincere; on the other side, it had adjectives such as sly, calculating, hypocritical, pompous, conceited, flattering, and pretentious….

At first we were surprised to see that there was a large sixth factor. The previous studies of the English personality lexicon had found only five; no sixth factor could be recovered…. [W]e started checking the results of some recent lexical studies conducted in various European languages. Now, most of these studies had focused on whether or not the Big Five would be recovered. In a few studies, however, the authors did mention briefly the results they found when they examined six factors. In each case, they found a factor that was defined by terms such as sincere and modest versus deceitful, greedy, and boastful–much like the factor that we observed in our Korean study.

Which brings me to Broward County and its police department.

Who runs into the building where children are being murdered?

Because we know people do run into the building.

What kind of person runs inside?

What kind of person doesn’t?

Having read The H Factor, I think the answer is corruption.

Who runs inside the building?

When corrupt officials are in charge, no one is safe.

I’ll post my Goodreads review of The H Factor later on.