Does that means 6 weeks in Paris is like smoking 21 cigarettes ?

Speaking of breathing the air in Paris, my reasonably-priced French inhalers are running low.

Have to round up a pulmonary doc.

Meanwhile here’s the head of American Airlines modeling coach seats on one of his planes: 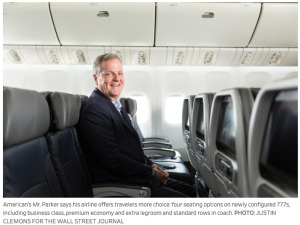 A couple of days ago, Ed’s brother was mugged waiting for the train to Versailles.

He was standing on the platform when a group of young men surrounded him, ripped his wallet out of his pocket, then pushed him onto the train and took off running.

END_OF_DOCUMENT_TOKEN_TO_BE_REPLACED

Just back from watching France beat Belgium — fantastically exciting — it’s astonishing how hair-raising a 1-0 game turns out to be. I had no idea.

Crowds are massed on the Champs-Elysées and cars are streaming down Avenue Maine, where we are, honking their horns and flying the Tricolore — yet, strangely, no one is turning parked vehicles over, stripping down to their underwear, or setting anything on fire.

If this were England, things would be different.

If this were Philadelphia, things would be completely different.

C. and Ed are watching the post-game coverage ….

C.: “They’re climbing light poles! I’m so proud of them!”

He came home with a big gash on his leg, which he says was worth it.

(Wifi and privacy restrictions are funky here, so we’ll see if the videos load. Preview isn’t working at the moment.)

I have no idea what Bastille Day is like here, and now I’m not going to find out.

My good friend Debbie Stier was just here for a week — !

Debbie brought Donald C. Smith et al’s Learning to Learn with her and spent part of each day working her way through the text. It sounds fantastic. Using his techniques, she was easily remembering all of the salient points.

When I get back, tackling L-to-L is next on my list.

I just re-read the post about listening in French & discovered that the section on the reason French children write dictees makes no sense.

Should be fixed now.

I don’t understand spoken Spanish at all well, either, but still.  With Spanish, it seems like I could understand a person speaking Spanish if I put my mind to it. Which I intend to do the minute I get back to the U.S. All these years studying Spanish, off and on, and still not fluent — arrgghh.

French is a different kettle of fish.

END_OF_DOCUMENT_TOKEN_TO_BE_REPLACED

The shoes I wore last summer seem to be about a half-size too big now.

Also, what is “casual elegant”?

I’ve been packing to spend 8 weeks away from home for a couple of hours now.

We’ll be in Paris this summer !

I haven’t lived in Paris since Ed and I met, so I’m excited. We both are.

While I’m there, I’d love to work with some students on test prep and/or writing, so if you have French friends with kids, I’d be grateful if you could forward this link:

Test Prep in Paris this June