What is the longest period of time a student can focus on a lesson without his/her mind wandering?

I sat in the back of the classroom, observing and taking careful notes as usual. The class had started at 1:00 o’clock. The student sitting in front of me took copious notes until 1:20. Then he just nodded off. The student sat motionless, with eyes shut for about a minute and a half, pen still poised. Then he awoke, and continued his rapid note–taking as if he hadn’t missed a beat.

Adult learners can keep tuned in to a lecture for no more than 15 to 20 minutes at a time, and this at the beginning of the class. In 1976, A. H. Johnstone and F. Percival observed students in over 90 lectures, with twelve different lecturers, recording breaks in student attention. They identified a general pattern: After three to five minutes of “settling down” at the start of class, one study found that “the next lapse of attention usually occurred some 10 to 18 minutes later, and as the lecture proceeded the attention span became shorter and often fell to three or four minutes towards the end of a standard lecture” (pp. 49–50).

This makes sense to me.

I think a lot of teachers intuitively deal with the fact that student attention waxes and wanes by a) repeating points, b) asking multiple questions (which repeats points), and c) using the blackboard/whiteboard (also repeats points).

That’s why Powerpoints are a problem: if you miss a slide you’re sunk. Nothing stays on the board.

(Part VI in a series of posts that will soon take us to a highly contagious and dangerously inaccurate meme about what autism is.)

In my previous post, I discussed how there might be factors besides Joint Attention deficits that could contribute to the failure to acquire spoken language. As I wrote:

END_OF_DOCUMENT_TOKEN_TO_BE_REPLACED

(Part V in a series of posts that will eventually take us to a highly contagious and dangerously inaccurate meme about what autism is.)

My previous post drew a connection between the severity of autism (whose diagnostic measures include Joint Attention behaviors) and the severity of the language impairment associated with autism. This connection, I suggested, explains why a significant proportion of people on the spectrum (somewhere around 25%) are nonverbal.

END_OF_DOCUMENT_TOKEN_TO_BE_REPLACED

(Part II in a series of posts that will eventually take us to a highly contagious and dangerously inaccurate meme about what autism is.)

So why is Receptive Joint Attention, as I noted in my last post, so crucial to language learning?

END_OF_DOCUMENT_TOKEN_TO_BE_REPLACED

Recent events—including the publicity surrounding the movie “Far from the Tree” and a highly contagious and dangerously inaccurate meme about what autism is–have me bursting with things to say about autism and language learning. There’s way too much for one post, and it’s hard to know where to begin.

So I’ll begin where it all begins: Joint Attention. 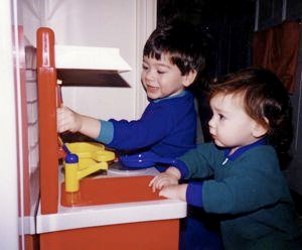 In words: two or more people attending the same thing.

END_OF_DOCUMENT_TOKEN_TO_BE_REPLACED

I’m about to make an observation that’s not remotely original, but this weekend’s experience was a revelation for me nevertheless, so I’m posting.

We’ve just emerged from the Great Tarrytown Blackout: two days without heat or running water in the wake of our second “bomb cyclone” of the winter.

Sidebar: It’s a good thing I like learning new words, because new-word enthusiasm mitigates the pain I feel having to learn new words about the weather. I don’t want to learn new words about the weather. Ever. And why are there new words about the weather to learn anyway? Seriously, I’m mystified. How can I have lived this long and not know all the words a normal human being who is not a meteorologist needs to know about the W-E-A-T-H-E-R? Why couldn’t I go to my grave never having encountered the phrase “polar vortex”? My parents did, and their parents before them. Ditto for bomb cyclone, a term I had never in my life laid eyes on until almost exactly two months ago, and now here it is again. Plus I got suckered on this month’s bomb cyclone because the first one was a hyped-up bust (BarStool posted a hilarious rant on the ridiculousness of January’s “bombogenesis,” yet another weather word I didn’t need in my life), so I assumed the second one would be, too, and I wasn’t prepared. Wasn’t prepared as in: wet laundry mildewing in the washing machine, Subaru imprisoned behind its electric door in the garage, rooms too cold to begin with so the temp didn’t have far to fall before hitting the 50s, no idea which-hotels-where take large, hyperactive dogs, etc., etc.

Our back story is that during Hurricane Sandy we lived without heat and light for nine days. We stayed in our house nearly the entire time, till we finally moved in lock, stock, and barrel with my friend Debbie. I still remember vividly the joy of making coffee in her beautiful kitchen with its beautiful Nespresso machine—the first one I’d ever seen; her parents had carried it back from Italy—running on its beautiful electricity and illuminated by her beautiful electric lights. (Thomas Edison! A great American!)

By the end of the Hurricane Sandy blackout, the temperature inside our house was down to the 40s, and I was suffering a mild depression. Mild depression was the good news; others in the neighborhood were clearly experiencing some cognitive impairment. Specifically, they were developing paranoia. Paranoia about Con Edison and its whereabouts, which is not going to land anyone inside the DSM-5, but still.

That experience may sound strange, but there it is. A very short period of sustained dark and cold will alter ‘cognitive status.’ I know, because I lived it.

Point is, I think our entire household probably has some mini-PTSD on the subject of power outages. I say that because, prior to Sandy, power outages felt like adventures.

That was then. This go-round all three of us—C., Ed, and I (Jimmy & Andrew’s home had electricity)—fell apart. Our collective mood darkened, we felt severely stressed, and we had no ability to focus. Whatsoever. Ed had a huge amount to get done over the weekend and did nothing at all; C. had papers to grade and an IEP to write and did none of that; I, in what I thought was a concession to reality, didn’t even try to do anything productive but instead assigned myself the task of going through old magazines & tossing them, and I couldn’t manage even that.

It was pretty shocking, especially given the fact that it’s not as if we’ve been living on the Island of Peace and Quiet for lo these many years. I’ve always been able to work in the middle of commotion; in fact, I like a certain amount of disruption and surprise.

That’s why I have two large, young hyperactive dogs.

Sunday afternoon, with the electricity back on and the (cold) water sporadically spurting out of the faucets once again, C. said he was thinking about his students.

And our concentration was shot.

Most of C’s students are poor, and quite a few of them—by no means all, but quite a few—lead chronically disrupted lives.

How does a child leading a chronically disrupted life focus in school?

And how much of the achievement gap is down to chronic disruption alone?