Continuing from where we left off, Facilitated Communication’s lack of credibility is multi-faceted.

As we saw in my last post, the messages that FC typically generates are highly suspect. With their often perfect spelling, sophisticated vocabulary, figurative phrasing, bland messages, and stilted tone, they don’t sound like they’re coming from the young kids and teenagers being “facilitated”–especially as these particular individuals seem to lack the Joint Attention behaviors necessary for picking up even the most basic vocabulary.

As we saw in the videos I posted (three of which have since been removed from Youtube), the behaviors of the facilitator and facilitatee are also highly suspect. The facilitator not only provides physical cues that are at least as salient as those that cued Clever Hans, but keeps her eyes fixed on the screen; the person undergoing facilitation often looks away, even while his index finger makes large arcs from one key to another or wanders over the keyboard while the facilitator shifts it around. In many of these videos, the keyboards interface with sophisticated word-completion software that allows the correct next word to be selected with minimal cuing–as we see up close in one of these videos.

To some extent, it never went away. Even after Frontline’s 1993 exposé Prisoners of Silence, which chronicled FC’s spectacular debunking in the wake of false accusations against parents of sexual assault, typed out by the fingers of facilitated children, FC has continued as a treatment for autism–as have cases of Facilitated Communication-enabled abuse charges.

But four recent movies have boosted FC to a whole new level of uncritical acceptance:

And FC has penetrated the therapy world as never before–via the Facilitated Communication Institute at the University of Syracuse (which was recently renamed the Institute of Communication and Inclusion, and which produced the second movie listed here)–such that: 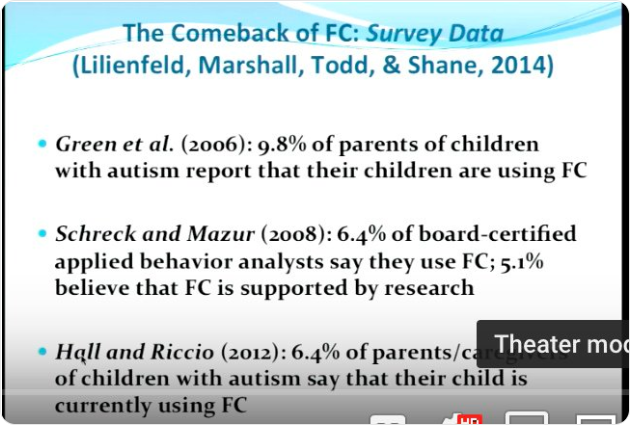 So many hopeful parents; so many duped therapists; so many well-intentioned philanthropists enriching unscrupulous institutes and their various gurus.

But one constituency that’s missing from this slide (from a presentation by Scott Lilienfeld at Harvard Medical School, broadcast in 2016, a couple of years before the most recent movies) is the most unlikely constituency of all. A fair number of highly verbal adults who identify as autistic have also embraced facilitated communication.

Why them? Stay tuned.

2 thoughts on “While the counter-evidence mounts, Facilitated Communication makes a comeback”