Here he is on blaccents.

Very worth your time.

McWhorter’s social dilemma is that although he is black, he sounds white. He has no idea why.

In the passage below, he’s completely right about the brain’s division of labor between conscious and unconscious ‘computations.’

We have two separate and distinct learning systems, one largely conscious, the other unconscious.

No one knows, yet, how the two interact.

Given that I am the kind of black person who is often termed “articulate,” it may seem surprising that I spend much of my life feeling quite thick of tongue. I am one of those unfortunate black people who sound white. It is, of all things, a social handicap.

I hardly consider myself significantly oppressed on this score. It is well documented that sounding black on the phone makes you less likely to be shown an apartment or house or to get a job interview. A black kid who uses Black English in school is often criticized by teachers and thought less intelligent. Classic experiments have shown that people’s evaluation of someone reading a passage changes according to whether it’s read by a white or black person. The black voice is rated less favorably—considered less bright, less friendly. My burden, in comparison, is a mere personal cross to bear, worse than having a hard-to-spell name but hardly on the order of being denied services and thought dim. Yet to an extent that few would have reason to know, I suffer.

When you’re black and you sound just like a white person, it puts a lot of black people off. The vast majority of black Americans, including educated ones, are identifiable as black from their speech; the “black sound” is a subconscious but near-universal hallmark of black American culture. This means that if you are black, upon meeting you, a great many black people will tacitly expect that the two of you will speak more similarly to one another—at the very least in terms of that certain “sound”—than either of you do to white people. That similarity is an index of acceptance and warmth in a society that looks askance on black people in so many ways. Then it turns out that you don’t sound similar, despite your black face. The wrong voice is coming out of you.

Although the expectation that you were going to sound black was not conscious, the fact that you don’t is processed quite consciously: it’s the discrepancy that elicits attention.

re: Linguistics on the fly and the do-operator

I love the Question Rule! I run through a gradual derivation of it with my education students so they can see how tricky it is to teach people with language delays and people learning English as a foreign language. Most people (however automatically they form grammatical sentences) have no idea how they do it!

The basic rule is purely formal (as opposed to semantic): when there’s an auxiliary or “be”, use that; otherwise use “do”.

“Do”, like the fronted auxiliary verbs in the above sentences, is what carries the tense:
Did/do you see anything unusual?

That would be what at least John McWhorter1refers to as the “meaningless do”, which is one of the features of English that makes it an odd language. His claim (or perhaps speculation?) is that it came into the language by contact with Celtic languages. And you’re right, it can be very hard for ESL students to learn idiomatically.

In most Germanic languages, a pattern like, “Eat we breakfast?” would be idiomatic, where in English the idiom, of course, is “Do we eat breakfast?”

1. Linguistics Prof at Columbia and brilliant lecturer on linguistics, including in the Great Courses series↩

I’ve been volunteering in a conversation class for L2 speakers, and last Thursday a question came up re: questions.

The exercise we were doing was a reverse Q&A. You’re given the answer and you have to construct with the question.

Question: “What is your name?”

Midstream, I became intrigued by a puzzle.

When do we use the “do-operator” to form a question and when do we not?

Question: “Where do you live?”

Why do we use a do-operator in ‘Where do you live’ but not in ‘What is your name’?

Only two L2 speakers had come that night, both long-time immigrants from Spanish-speaking countries. Although they seemed to be using the do-operator correctly, neither could say how or why they used it when they did. I assume that means they’ve learned most of their English informally, interacting with native speakers.

The young man who volunteers with me — his Spanish seems to be fantastic (jealous) — had no idea, either.

Naturally I became obsessed on the spot, which may not have advanced our L2 speakers’ cause, I realize. Then again, a little linguistics never hurt anyone.

Running through the do-questions in my head — while simultaneously trying to keep the exercise going so as not to short-change the class — I spotted a difference, or thought I did: the presence or absence of a linking verb, or copula.  (I learned the term “copula” from Katharine, for the record.)

As I understand it (Katharine will have to weigh in) we use linking verbs when, in a simple clause, the subject and the ‘3rd term’ – the complement – refer to the same thing (or “have the same referent”).

So far, so good. All three questions follow the rule I came up with on the fly:

But now I have a problem:

But the question form doesn’t use a do-operator:

So what is the do-rule, anyway?

I suspect this page has the answer, but it’s way too hard to read. Way too physically hard.

If you’re going to learn linguistics on the web, graphic design is a must.

I never met him, or heard him speak, but Richard DuFour meant the world to me.

He was the superintendent who thought suburban students deserved accountability, too.

On the other end of the socioeconomic spectrum is affluent Adlai Stevenson High School—a one-school district in the Chicago area. Students and teachers there worked in the same team-based professional learning communities and benefited from the same honest, tough-minded leadership advocated here. They relied exclusively on in-house expertise as teams met, by course, to share and prepare lessons and units that they continuously improved on the basis of common, team-made assessment results. Over a 10-year period, under the leadership of Richard DuFour, Stevenson broke every achievement record on school, state, and college entrance exams. Advanced placement success increased by 800 percent (Schmoker, 2001b).
Results Now: How We Can Achieve Unprecedented Improvements in Teaching and Learning by Mike Schmoker

Just before Christmas, I sent a copy of Europe in the Modern World to my friend Debbie Stier — Perfect Score Project — and she’s been using it with her students ever since.

So far, our exercises are working for her students (and for Debbie) the way we hoped: they explain why the right answer is right.

Debbie says that a lot of the College Board explanations are too vague to be actionable. They’re not wrong, but they don’t leave students any less likely to make the same mistake again. 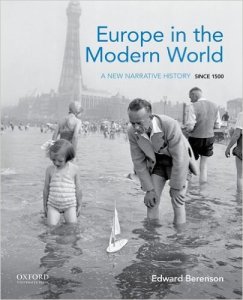 The structure of every sentence is a lesson in logic.

A couple of days ago, Catherine passed on my explanation for why “whom” sounds wrong in this sentence:

The F.B.I. also arrested two of Mr. Rahim’s associates, whom prosecutors say were involved in the plot.

But what if the F.B.I. sentence had read:

The F.B.I. also arrested two of Mr. Rahim’s associates, whom prosecutors persuaded to cooperate in the investigation.

This sentence may sound awkward, but the problem isn’t the choice of “whom” over “who.”

In terms of sentence grammar, it’s the people’s status as objects that wins out. The F.B.I persuaded them to cooperate, not they to cooperate.

Complicating matters, of course, is that much-lamented trend: “who” is displacing “whom.” So it sounds fine to say:

The F.B.I. also arrested two of Mr. Rahim’s associates, who prosecutors persuaded to cooperate in the investigation.

Returning to “persuade them to do X” vs. “persuade they to do X,” why does being an object win out, grammatically, over being a subject? As we’ve noted earlier, grammar sometimes gets arbitrary. Indeed it often gets even more arbitrary than this.

If you look carefully at what I’ve just written, for example, you’ll see a sentence that calls into question my entire explanation. The sentence is “These people are … the subjects of whatever sentence-like things we want them to do.“ The problem, in boldface, is the verb “want.”

To see this more clearly, let’s look at one more “F.B.I. sentence”:

The F.B.I. wants them to cooperate in the investigation.

Nor do I write “people are the subjects of whatever sentence-like things we want they to do.” Except when pointing this out as an exception.

Speaking of who/whom, here’s a pronoun case chart from cengage.

I assume it’s from the textbook Evergreen: A Guide to Writing by Susan Fawcett.

Personal narrative: I saw a pronoun case chart for the first time in my life when I started teaching freshman composition. Up to that moment, I had no idea what the grammatical distinction was between who and whom; I certainly had no clue what the word “case” might mean, or what part of grammar it applied to.

The chart was a revelation.

Interestingly, I discovered that in fact I did know the distinction unconsciously, deep down in my basal ganglia, where grammar resides. I had picked it up in spite of the fact that whom has been dead for a century.

My basal ganglia knew the dead-for-a-century business, too.

The basal ganglia are much smarter than we give them credit for, but that is a subject for another day.

As promised, here is Katharine’s explanation of the who/whom issue in the F.B.I. sentence:

The F.B.I. also arrested two of Mr. Rahim’s associates, whom prosecutors say were involved in the plot.
From: One by One, ISIS Social Media Experts Are Killed as Result of F.B.I. Program

“Whom” sounds wrong to me, and Katharine says it is wrong. The right word is “who.”

I was confused by the F.B.I. sentence because, to me, “whom” looked like the object of say (because “whom” refers to “two of Mr. Rahim’s associates”).

But if it was the object of “say,” why did it sound wrong?

It turns out that — and you need a linguist to explain this (at least, I do) — “whom” isn’t the object of say.

“Say” takes a “sentential object“: it takes a sentence as an object.

Other verbs take a simple noun as their object.

I said I wanted toast.

That’s why you don’t write:

I say him did it.

Nor do you write “The F.B.I. also arrested two of Mr. Rahim’s associates, whom prosecutors say were involved in the plot.”

One of the things I loved about working with Katharine on the textbook is that she always knows the answer to grammar question — not just knows the answer, which I usually know intuitively, but can explain the answer.

This sentence stumped me:

The F.B.I. also arrested two of Mr. Rahim’s associates, whom prosecutors say were involved in the plot.
From: One by One, ISIS Social Media Experts Are Killed as Result of F.B.I. Program

That “whom” sounded wrong.

Usually, when something sounds wrong to me, it is wrong. But then, when I read the sentence again, thinking about its grammar, I wasn’t sure.

Wasn’t that “whom” the direct object of “say“?

“Whom” is the direct object form. Not “who.”

I’ll post Katharine’s explanation tomorrow. (Or make her do it!)